When we land in Vilnius it is a beautiful, late August evening. We drop our bags at the hotel and after a few minutes we are walking to the great Cathedral square, a popular meeting spot. There’s a big crowd, locals and tourists alike are there. We hear somebody speaking Italian: in this season, a lot of our fellow countrymen visit Lithuania.

We are there because we want to report on the 30th anniversary of the Baltic Way. It was such a pivotal moment in history, its importance cannot be underestimated. When I first heard of it, I was stunned: how could people have organized an actual human chain stretching all the way from Vilnius, the capital of Lithuania, to Tallinn, in Estonia, passing from Riga, the capital of Latvia?

REPORTING FROM THAT DAY IN OUR VIDEO

It covers a whopping 600 km (the equivalent of more than 370 miles). In 1989 the Baltic countries were still under Soviet occupation. The political climate was definitely not the one we have today. Sajūdis had won the elections the year before and the relations with the Kremlin were strained. There was no room for mediation: Lithuania, like the other Baltic states, wanted to be free both from the political domination of the USSR and from the military occupation of the Soviet Army. Both these requests were never considered by the USSR. 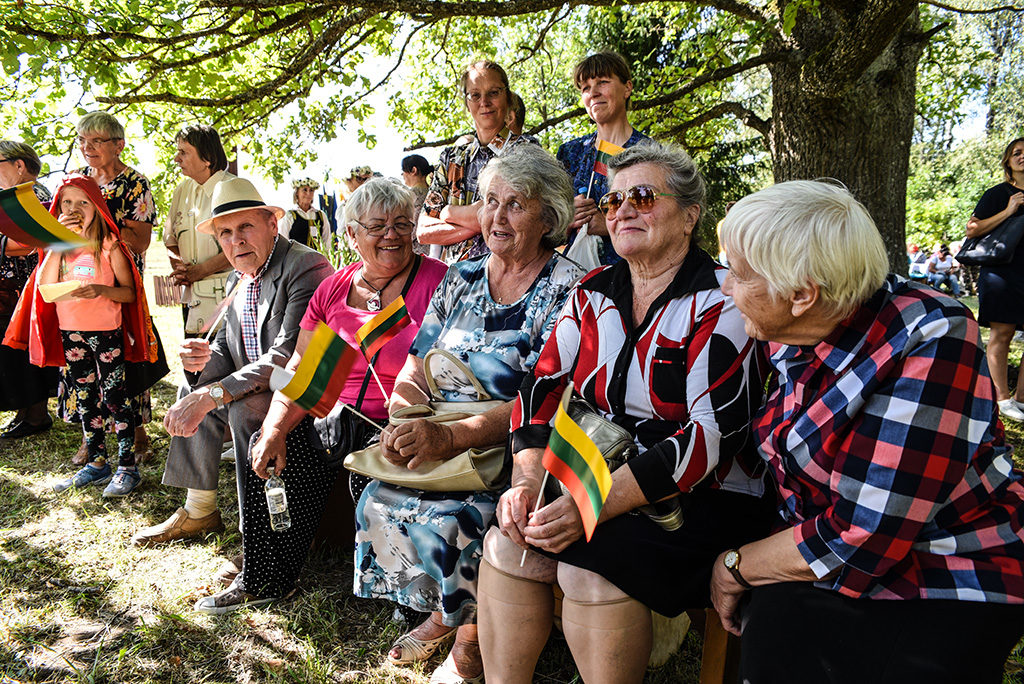 On August 23rd 1989, at 7pm, what both the independentist movement Sajūdis and the organizers had been working on for a little over a month finally happened: a long human chain connecting Vilnius, Riga and Tallinn. Two million people along the Baltic roads, including one million Lithuanians. The organizers themselves were taken aback at the success of the initiative, which was originally expected to attract between two and three hundred thousand people. The day wasn’t chosen randomly. On August 23rd, 1939 Nazi Germany and the USSR signed the Molotov-Ribbentrop Pact which basically divided Eastern Europe in two areas of influence between the countries: the Baltic states, of course, ended up being under Soviet influence. 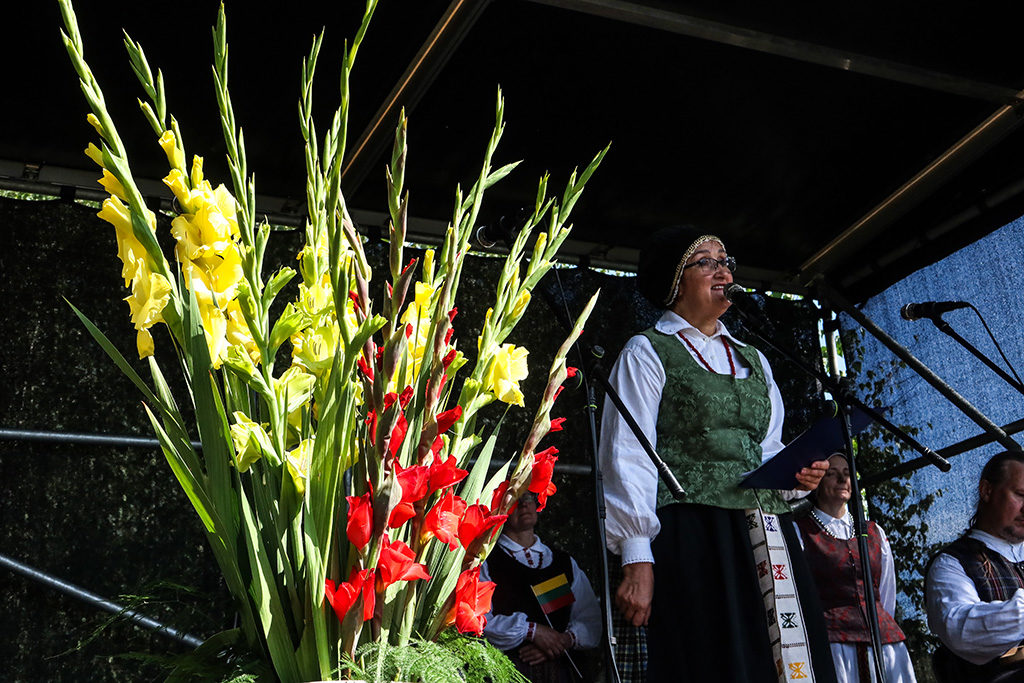 It’s been thirty years since that day in ‘89 and Lithuania is getting ready to celebrate that momentous event. Beside the Cathedral there’s a great art piece: hundreds of Soviet-time radios stacked one on top of the other. The National Radio and TV Station is behind the installation. We are reminded that the radio had a primary role in that event: there was no internet back then, let alone cellphones, so the radio was the only way to share information, also during the event itself. Many people are transfixed by the enormous piece, probably a few are looking to see if they can recognize the model they used to have. The radios were actually brought in by the citizens themselves. The TV station management was surprised, who knew that there were still so many dusty old models lying in people’s attics and basements? 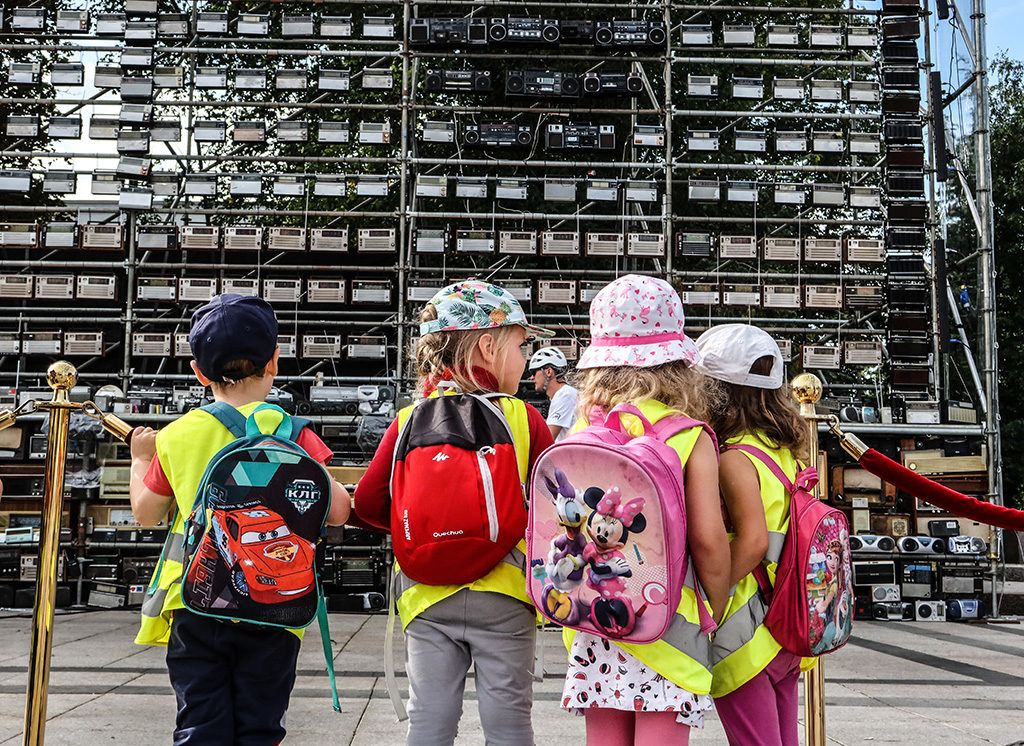 On the 23rd of August, we wake up early. The day will be very long. In the Cathedral square the organizers are putting the last touches for the event that will be in full swing in the evening. There are kids with their teachers on a school trip. Their eyes are caught by the radio display while their teachers educate them about the meaning of this day. Someone is stacking leaflets on a table under the bell tower of the cathedral. The lyrics to the songs, either patriotic or just popular, that will be sung are printed on there. Some of the women are in folk costumes. A group of runners sprints off – we will catch them again in a while. They plan on reaching the border with Latvia. 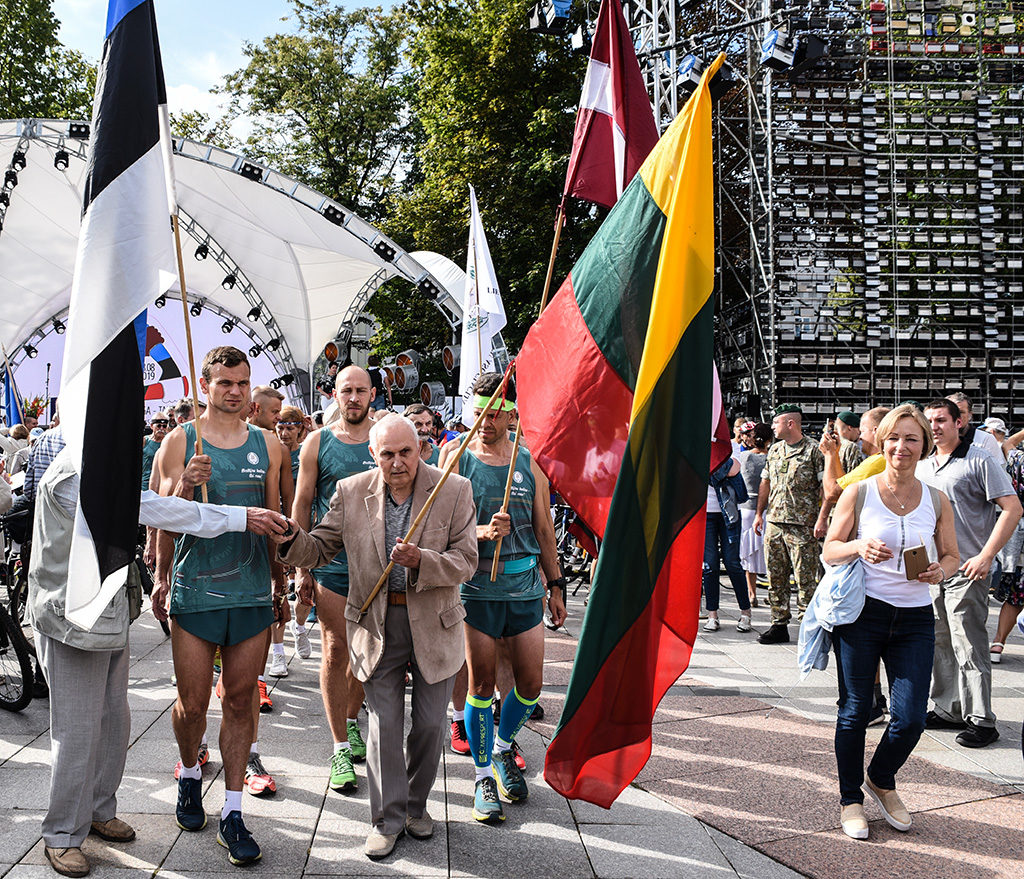 We leave the capital and we trace the original Baltic Way along the highway to Panevėžys and the Latvian border. In 1989, the last kilometers weren’t even paved. Our destination is Kilometer 105: a stage has been set there and some authorities are expected to give a speech.

We take a few breaks during the ride. We meet a group of cyclists who are riding along the entire Baltic Way to Tallinn as well as people from many different cities: everyday citizens, people who survived the deportations, town mayors and other notable guests. They are surprised to see two Italian journalists there. They tell their stories so proudly. There are also many young people. They weren’t there yet when the original Baltic Way happened and they are so happy to get the chance to see this one. The youngest in the group were born in an independent Lithuania. 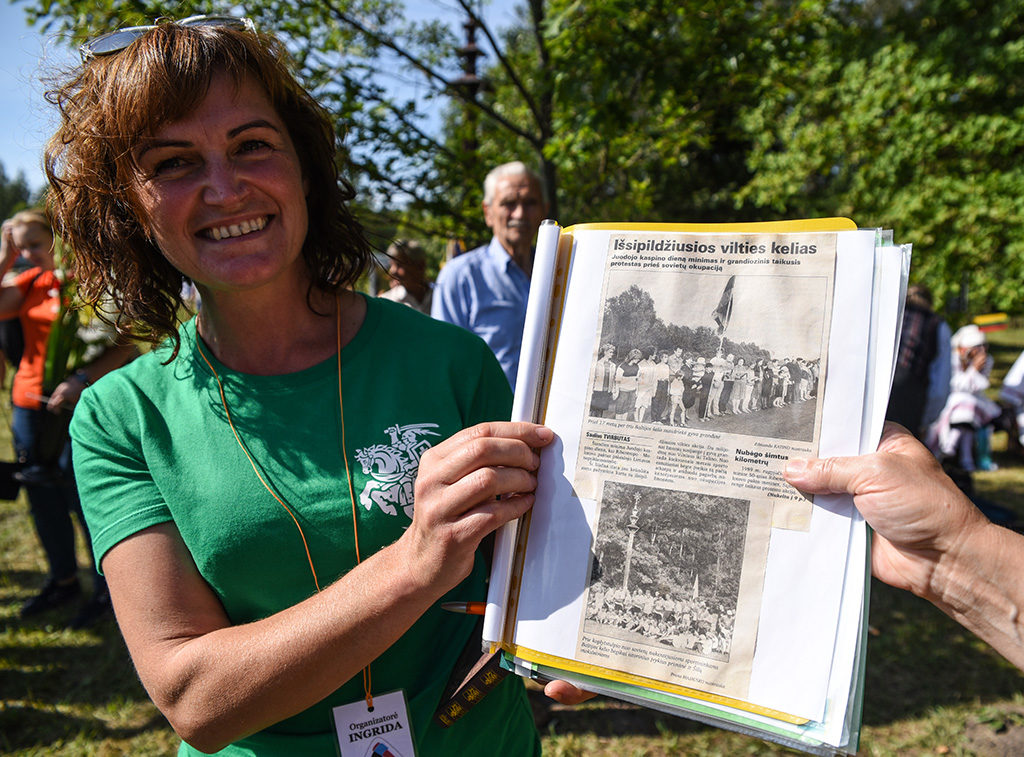 A woman shows me the paper she’s carrying: it’s a newspaper cut-out showing a picture of the first Baltic Way in 1989. She’s in the picture: “First from the left”, she tells me smiling. A group of four people stands roadside. Close to them, a tree and a small monument. The two sisters and their husbands, we discover, are in the exact spot where they were thirty years ago. They planted the tree and built the small monument not too long ago.

We see a long line of people, they come from Kaunas and other cities. They are walking towards Kilometer 105. Young and old, they chat, they sing. Kids run back and forth, we bet they will have walked double the distance of their parents by the end of the day.

As the hours pass, the highway gets crowded, many busses and cars are parked along the side of it. It is a big party.

We go back to Vilnius: even from the suburbs we can make out a long line of people, a human chain just like the one that was created 30 years ago. As we approach the cathedral, it gets more and more crowded. The square itself is packed. 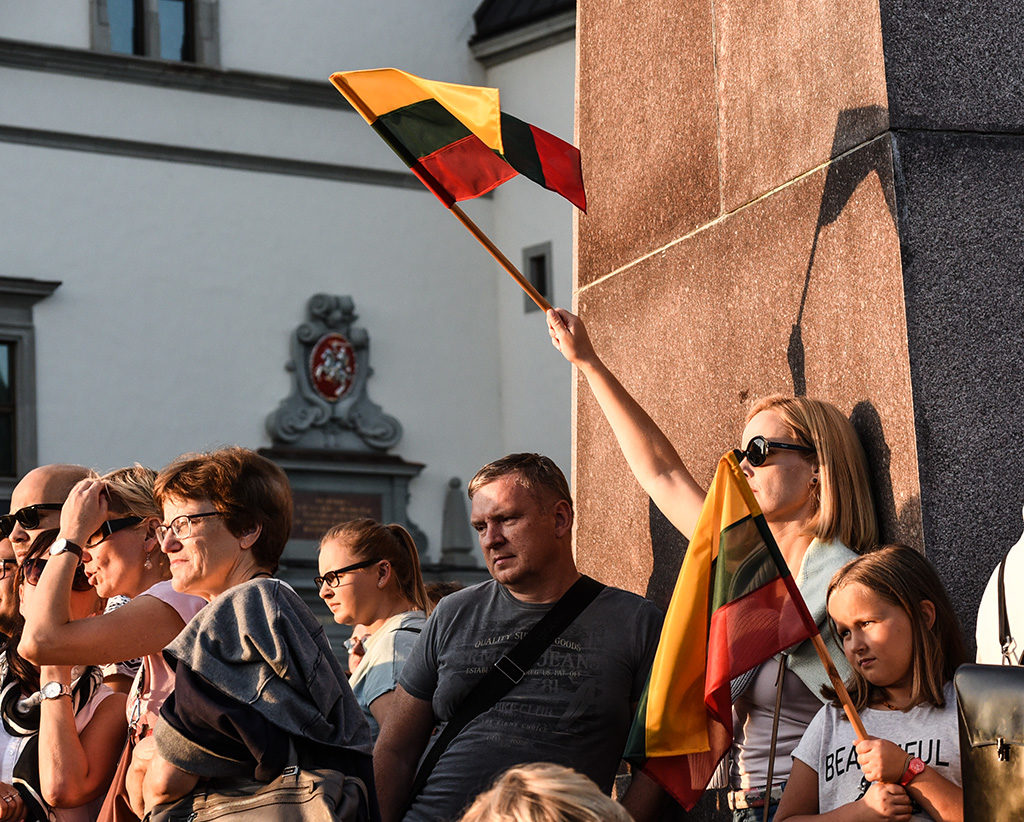 The celebrations are all around us, it’s hard not to get swept up. The official event starts: there is music and live reporting from the other Baltic capitals, and the newly-elected Lithuanian President Gitanas Nausėda, as well as the Sajūdis activist Vytautas Landsbergis give speeches. The latter was the person who proclaimed Lithuania’s independence in 1991 and tried to negotiate with the USSR during the tragic events of January 1991. His speech in particular is met with thundering applause. The long day of celebrating is coming to an end while the sun casts its last rays of light on the city. (Translated by Inglese Americano)

Mr. Ričardas Šlepavičius – Ambassador of the Republic of Lithuania in Italy

Ministry of Foreign Affairs of the Republic of Lithuania

One thought on “Report: The 30th Anniversary of the Baltic Way in Lithuania”